As if by magic, we got to this point.

Little vanventures has scored ’32’ on the scrabble board.

Now, there’s a whole lotta travelling to go through, before we actually get to be sitting here, at The Old Bridge Inn, starting with…

Our first stop was Stirling, we found a small off grid carpark on google maps, when we arrived it turned out to be a HGV test centre which then led on to another carpark for the ‘Anglers Society of the River Forth’. This is where we pitched up for the night, not before having some food first of course. We went to Frankie and Bennys. Now, this is one of the benefits of only being a part time van lifer, we still both work so the occasional splurge on food after a long drive doesn’t quite break the bank. We then went for a little drive up to the castle, the views of Stirling at night are not something to be missed. I also have to pass comment on the way they light the castle, it certainly makes it look dramatic. We think the castle is very similar to Edinburgh Castle, however it just seems to be a lot easier to get photo’s as it’s not as built up an area as Edinburgh is.

Please see below for exact camp spot locations. I might just add, this spot was a little noisy as it was by the M9, however it didn’t cause us any problems. 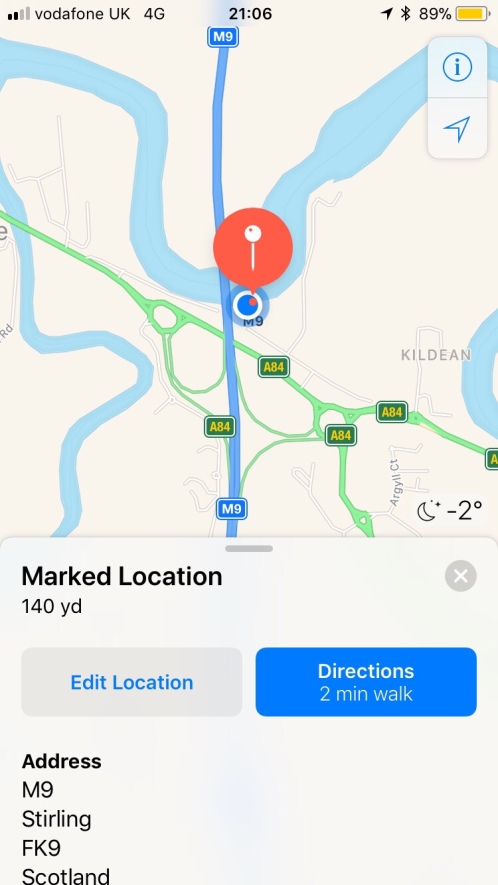 In the morning, we made porridge and had a brew whilst discussing our plans for the day ahead. We decided to go up to the castle again, take some more pictures, then the Wallace monument and finally do a quick food shop before heading up to Aviemore.

It’s not often we actually stick to our plans so today was a first! We drove back up to the castle, parking for 4 hours was £4. Not too bad considering the castle carpark at the top is quite a good base point for the rest of Stirling. We decided to leave going inside the castle, it was £15 each, we were happy enough with seeing the views and the outside of it. We took quite a lot of photos of the castle and Wallace monument from the View points, then headed down the hill towards Stirling centre.

On the right hand side just after the Castle carpark, we came across a lovely little pub called Portcullis. This used to be the Old All Boys school. We had drinks and two meals for under £20 and I can highly recommend the Cajun chicken wrap!

After this we wandered down some of the quaint streets of Stirling, then drove onto the Wallace monument for some final photos.

If you would like anymore information on Stirling Castle or the Wallace Monument please see;

When we took a quick stop at Aldi to top up the food supply, where I embarrassingly managed to pull the wrong handle in the toilet and set all of the alarms off. I had to stand and explain to the frantic woman that I actually didn’t need rescuing, I was perfectly fine and it was all just a mistake.

I decided to drive the first stint to hopefully avoid driving in the snowy/icy conditions. On the way, we saw signs for Dalwhinnie and decided to stop to see if we could get hold of any Dalwhinnie whisky glasses as Toms Dad had received a bottle for Christmas.

We drove into the village and was met by the huge Dalwhinnie distillery. I have to admit it does look a little out of place in such a small village! We were too late to do one of the tours however we did get chance to go in the visitor centre and shop where we learnt that it’s the highest distillery in Scotland and Dalwhinnie is the highest village in Scotland. Also, it’s an unofficial weather station for the Met office.

Dalwhinnie is currently doing free tours of their distillery with a wee dram of whisky! So that’s one we’re adding to our list!

We got the glasses we wanted and Tom somehow ended up with a bottle of whisky!

Once we arrived at Aviemore, I was given the option, do we want to camp quite remotely by a Loch or stay near the town centre? We both agreed that considering there was potential for it to hit -7 that evening, we would be best staying slightly closer to town!

There’s a lovely little pub called the Old Bridge Inn, which has a huge carpark that backs on to the River Spey. The river makes it feel remote but the pub reminds us civilisation is nearby!

Tom nipped in to ask if we would be okay to stay if we came in and had a pint, the staff were more than happy with this, in fact I don’t think they would have been too concerned even if we hadn’t had a beer – always best to ask though!

We parked up, had our BBQ and made our way across the snow to the pub. I walked in first, wondering why I was getting some seriously funny looks, it was only when I reached the bar and saw my reflection that I realised I’d left my head torch turned on!

Now here we are. Sat by the fire at The Old Bridge Inn and Little Vanventures has just scored us 32 points at scrabble.

I wonder what tomorrow will bring for us….